All work and no play makes Jack a dull boy.

Following this philosophy, INLEAD recently organized Time Warp, a fun activity for its students. The activity which had students from all the current batches in attendance proved to be a breather from their daily study routine and left them with memories to cherish for life.

An air of fun and excitement engulfed the INLEAD campus for two long hours on Thursday as 15 super-fun games unwrapped one after another.  The games which were conceived and fully tried and tested by LEAD faculty, Ms. Priya Bali and Mr. Sumit Chakravarty, were an interesting mix that tested the participant’s concentration, response and intelligence quotient.

Games like Bit Dicey – which involved balancing three dices on a scale in your mouth and a race to the finish line, tested the participant’s concentration potential in a room full of hooting and cheering crowd. On the other hand, activities like Face the Cookie—which involved moving a cookie placed on your forehead to your mouth using nothing but your facial expressions was a great test of developing quick techniques for different tasks. Various other games like Gemstick- which involved sucking Cadbury gems from a bowl using a straw and then dropping it in a bowl kept on the other end had the audience in splits from start to end. 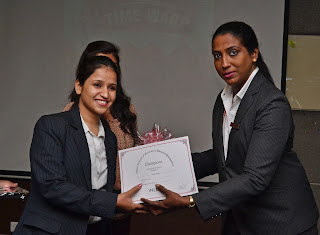 Time Warp was organized with a vision of adding a sense of competition and enthusiasm as a way of life in students.  The excitement and participation shown by INLEADers was worth a sight and took the momentum of the event to a whole new level. Though it was a competitive activity, INLEADers showed great sense of sportsmanship and encouraged each other to take part in the various games.