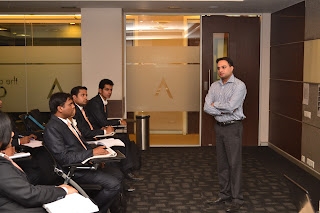 INLEAD conducted an Industry Expert Session on 31st May for the Events Management students of April’12 and October’11 batches. The Session was conducted by Mr. Amit Arora, Manager- Marketing at TAM Media Research.Mr. Amit Arora has earlier worked with some reputed organizations like Ganex India Marketing Pvt. limited, The Helping Hand - Program Partner ICTRC and Telemarketing at Qualified Learning Systems.He has specialization in ATL/BTL activities, Account Management, Customer Relations, Internal and External communications and is an expert on TRP's. 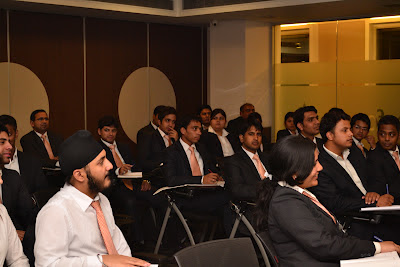 Topic for the session was Television Audience Measurement. The session helped students to understand the methodology used by TAM Media Research for audience measurement of television and radio in the form of TRP's. He shared that there is a nine step procedure which is being used to select the households to install the TVM5 meter which then sends the data back to TAM Media Research for the viewership analysis. Currently there are 8165 TVM5 meters located in urban class 1 towns which are 162 in total.

Once the data being collected, then it is analyzed at the backend and a report is generated. This report contains viewership analysis of the content of different broadcasters which then help broadcasters to understand viewership and this helps them to review their content from time to time. The report also helps advertisers to make an effective media plan for their clients as they come to know about the programs which are doing well on television.
Posted by Unknown at 6:07 PM No comments: 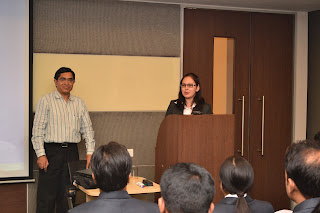 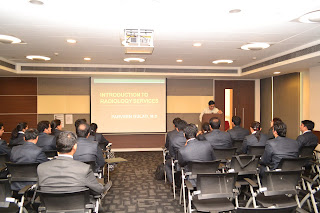 Topic for the session was Radiology Services. The session helped students to learn about the basic concepts of Radiology and how the new technology has helped it evolved in the two decades. He stressed on the point that presently the scope of radiology is not just limited to X-Rays; it now also includes much more modalities like MRI (Magnetic Resonance Imaging), CT scan (Computed Tomography), Nuclear Medicine (Using of Radio Isotopes) and DXA (Dual X-ray).

He also threw light on the legalities that are involved with these devices, what are the different certifications that are need to be taken care of by the administrator before the installation of the devices and how he has to monitor that proper tests are conducted during the installation and proper precautionary measures are taken care of before they are open for the general public.
Posted by Unknown at 5:30 PM No comments: 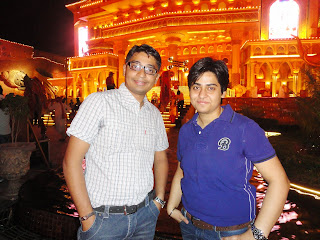 
On 21st May 2012 INLEAD conducted an Industry visit to Kingdom of Dreams for its Events Management students. The visit to Kingdom Of Dreams was once in a life time opportunity for the students of INLEAD Gurgaon. The visit helped students to understand the insights of Nautanki Mahal, Culture Gully and Showshaa theatre. It also helped students to learn about various aspects of assembly. 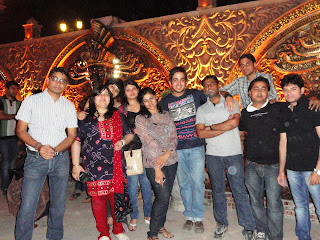 Kingdom of Dreams is the ultimate entertainment and leisure destination. The company behind the lofty project of `KINGDOM OF DREAMS` is the 'GREAT INDIA NAUTANKI COMPANY' (GINC). GINC is a combined venture of Wizcraft International Entertainment Pvt. Ltd., Apra Group of Companies and Raghbeer Group of Companies. This fabulous Kingdom brings to life a blend of Indian art, culture, heritage, craft, cuisine and performing arts...all with the technological wizardry of today.
Posted by Unknown at 3:48 PM No comments: 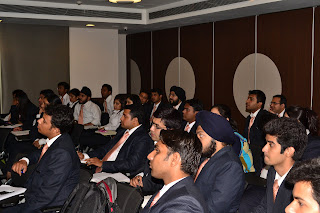 INLEAD conducted an Industry Expert Session on 17th May for the students of Events Management of April’12 and October’11 batches. The Session was conducted by Mr. Shariq Khan, Manager – Marketing, Arctic Multimedia Pvt. Ltd. Mr. Shariq Khan has started his career as an Account Manager Newgen Software Technologies and then later on he moved to Tangerine as an Assistant Manager - Marketing. 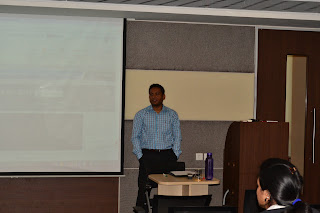 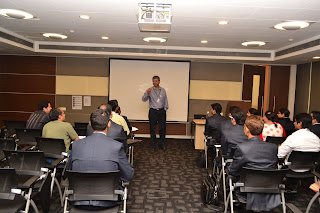 INLEAD conducted an Industry Expert Session on 14th May for the Healthcare Administration students of April’12 batch. The Session was conducted by Mr. Sunil Chandwani Head - URS, Business Strategic Solution, India. Mr. Chandwani has a rich experience of more than 22 years, of which he has more than 10 years of exclusive experience in Manufacturing Management and 12 Years of experience in Management Consulting, Training / Auditing in Manufacturing & Service Sectors like Telecom, Life Insurance and Media. 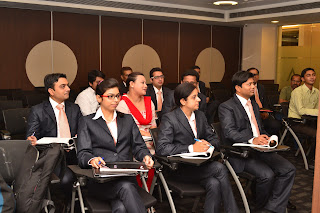 Topic of the session was Introductionand Implementation of ISO in Healthcare Industry. The session was started with a small test, by asking students about their knowledge about quality. Mr. Sunil threw light on different concepts of Quality like SIPOC (Supplier, Input, Process, Output, and Customer), FTR (First Time Right), and CTQ (Critical to Quality) with the purpose to enable the students to form a foundation for learning the concepts of ISO. He also highlighted the eight clauses of ISO 9001:2008 that set out the requirements for Quality Management System. He explained the documentation control policy to be followed by the organizations going in for ISO.
Posted by Unknown at 6:03 PM No comments:


TALK SHOW – The latest addition to the student’s activity calendar culminated into a resounding success. The activity was meticulously planned by Ms. Priya Mehta and passionately executed to perfection with active and enthusiastic participants from the students of April 2012. The show had the students mimicking prominent personalities from Bollywood, Politics, Business and Cricket and participating in a talk show in their signature style. 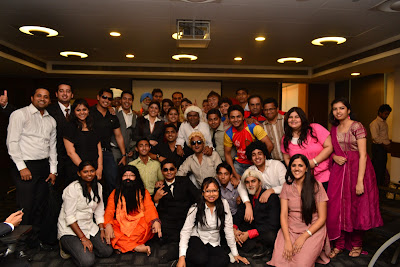 While all the performances were received with a hearty laughter and thundering applause, special mention needs to be made for Abhishek Chandra’s depiction of Navjot Singh Siddhu and Naimish Shroff’s Shekhar Suman, that even had the faculties in splits of laughter and students rolling on the floor. For some of the students, if they  ever think about an alternative career, Bollywood certainly can be one of the options and as ever, Mr. Sandeep Bhandari will be there to assist them in placements there as well J.

Although there were no tickets involved to see the show but it was a complete PAISA VASOOL SHOW!!!

The winner of the activity was the Politics team because of their overall balance in the whole act and the individual best character was won by Abhishek Bhandari who played the character of Navjot Singh Siddhu.

The activity brought together students coming from different parts of the country and its witty and humorous outlook settled down the initial hesitation and nervousness of the incoming batch. All the acts were packed with clever and witty one-liners and some scintillating dance performance gave the show the feel of a comprehensive masala package.
Faculties also believed that there is no dearth of talent in April 2012 batch and they would like to see these students to carry forward the same spirit and enthusiasm in future activities and to their respective professional careers.
Posted by Unknown at 1:24 PM No comments: 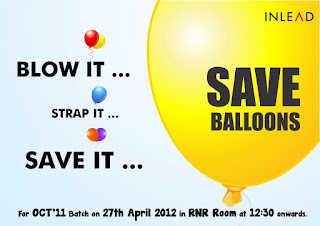 In INLEAD Leadership, Education and Abilities Development or LEAD certification is awarded to students to bridge the gap between campus life and corporate life. This certification basically helps a student to build up on current personality, communication skills, grooming standards and developing the right attitude towards leading and working in a team.
Under this certification several activities are held at regular intervals. One of the recently held activities was “Lead Activity – Save Balloons “. This activity is full of energy and enthusiasm which helps the participants to focus on collaboration and team work. It also highlighted the importance of communication and planning while performing the given task.
The group was divided into two teams. The first task was that each and every team member has to blow up two balloons and strap it on their ankles. Then the team leaders would place their members strategically, according to the competencies of the opponent team. The second task was that each member from the two teams would come in the centre and try to deflate the balloons of their opponent. When all the participants had done this once then team leader would decide their top five members and then each member would go in the middle and follow the same process. In the end the team left with higher number of balloons  would win the activity.
Posted by Unknown at 2:54 PM No comments: