INLEADers visited Vivanta By TAJ, Gurgaon on 22nd May, 2015 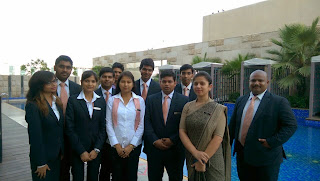 Entering a five star hotel with an empty stomach and exiting it with a fully stuffed stomach after a gastronomical delight is one thing but entering a five star hotel and exiting it with a stomach full of knowledge is something else entirely. Well, INLEADers recently had one such experience when Vivanta by Taj opened the door to its five star hotel and functioning secrets to them during an Industry Visit. Sharing its name with one of the eight wonders of the world, Taj Mahal, Taj Hotels is considered as an emblem of luxury hotel experience in India. 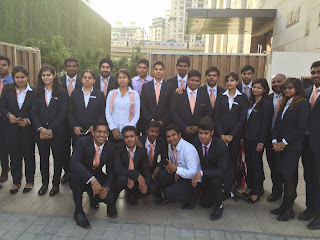 The Vivanta Industry Visit was organized as a part of INLEAD’s initiative to make its students acquaint with the relevant industry that they are going to enter in the near future. The visit educated the students with nuances of functioning of an upper upscale hotel like Vivanta and familiarized them with the various departments operating in a typical hotel. Mesmerized and spell bound with the exquisite international interiors and elegant marble and Oakwood flooring in place, the students had an enriching and mind stimulating experience.

Vivanta is one of the four brands under the Taj Hotels and was recently voted as the World’s third best brand for the year 2014. The Vivanta property at Gurgaon is the 100th hotel under the Taj brand and is famous for being the only hotel in the city that allows pets to stay.


Mr. Tushar Abrol, training manager, Vivanta by Taj, also held an interactive session with the students towards the end and answered their each and every question related to the hotel’s functioning with much exuberance.

Overall, the visit provided them with practical knowledge about the functioning of an upscale hotel like Vivanta and gave them a clear and firm grip of the MICE concept.

Technology in Healthcare, the new member!

India’s healthcare professional and infrastructure shortage is one of the major reasons for its high mortality rate. According to statistics available from World Health, India ranks among the lowest in the number of hospital beds per 1,000 people. With just 0.9 beds per 1,000 people, the country is far below the global average of 2.9 beds.

In an effort to change this scenario and provide the healthcare industry with the best lot of Healthcare Administrators, INLEAD recently facilitated an Industry Visit to Columbia Asia Hospital, Gurgaon.  The visit to the 100 bedded multi-specialty hospital was a part of the institute’s continuous Corporate Training Initiative for its students. 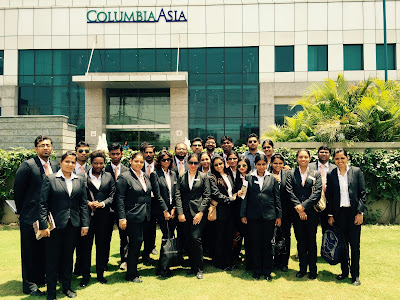 The industry visit provided INLEADers with a great opportunity to closely observe the working of an International Hospital like Columbia. They also came face to face with various modern and international technologies being employed by different departments of the hospitals for various hospital processes.

Technology has now become an integral part of the modern day healthcare. A lot of healthcare of the present and the future have their foundation in Technology.

The visit began with the hospital’s HR Manager briefing the students about the hospital and then taking them for a facility tour. The hospital staff was more than welcoming towards the students and answered their each and every question with much enthusiasm.

Columbia Asia Hospitals Pvt. Ltd. is known in the industry for their clean, affordable, efficient and accessible Hospitals. It is one of the first healthcare companies to enter the Indian market through 100 % Foreign Direct Investment (FDI). The hospital established in 2008 has been successful in becoming one of the prominent names in healthcare in Gurgaon in no time.

Posted by Unknown at 5:53 PM No comments:

Revenue Management has for long been the cornerstone of every successful enterprise but with the emergence of ecommerce and various other such trends, this concept has seen some drastic changes over the years. 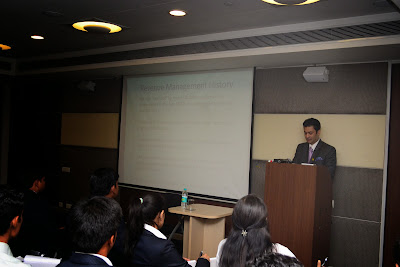 In order to keep our students abreast with the latest trends and techniques of Revenue management, INLEAD organized an Industry Expert session with Mr. Sandeep Joshi, General Manager of Fortune Select Excalibur, Gurgaon on 15th May, 2015. Mr. Joshi has over 24 years of rich experience in the Hotel Industry.

The session which lasted for over two and a half hours covered the A to Z of revenue management. From addressing the basic question of ‘What is Revenue Management to its latest techniques like SPARR (Special Potential Average Room Rate), Mr. Joshi made sure that INLEADers didn’t miss out on any important information.  He burst out the popular myth that revenue management only deals with money management and educated the students that the concept basically deals with making sure that the right product reaches the right customer at the right time and at the right price. 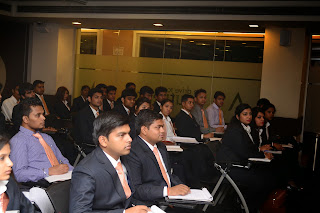 Talking about the concept’s origin, Mr. Joshi enlightened the students that the concept was first introduced in the 1970’s by the airline industry.  It was invented by major US Carriers after the airline deregulation act forced them to compete with new low cost carriers.

Mr. Joshi kept the entire session quite lively and interesting by incorporating his own professional experiences throughout the session.  Listening to Mr. Joshi’s journey from an assistant catering head to a General Manager in a world renowned Hotel instilled the students with gumption and excitement for a bright future.

In the end, the session concluded with Mr. Joshi encouraging the students to stay focused on their long term goals and keep working hard towards achieving them.

Posted by Unknown at 9:26 AM No comments:

Dramazaa- Lots of Drama and lots of mazaa 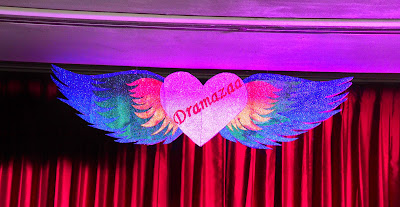 The LEAD Orientation activity - DRAMAZAA was conducted for all the programs of the new batch. The event was a grand hit and witnessed some amazing and breathtaking acts from the fresh batch.

Dramazaa as the name suggests had lots of drama and mazaa to offer.  It showcased five acts – ‘Tingfisher’s Bolly Fiesta’, ‘Sahiba-Mirza – An eternal Love Story’, ‘Aladdin in Love’, ‘Yeh Raat – A mystery’ and ‘Mujhe Pankh De Do “each depicting various genres of theatre like Comedy, Romance, Fantasy, Horror and Social respectively.  Each act was beautifully crafted and reflected the sincere hard work put in by the students.

In the end, ‘Mujhe Pankh De Do’-A musical act depicting the plight of modern Indian women won everyone’s heart including the judges and walked away with the best act prize.

Posted by Unknown at 5:56 PM No comments:

For most of us hospitals have always been synonymous with Doctors and nurses as these are the people with whom we mostly interact with while in a Hospital.  But, there is more to a hospital than just them. Every hospital has an army of people managing the daily working of the hospital in order to make sure that each and every patient is treated at the right time and by the right specialist doctor.  They are the ones who foresee that each department works smoothly and the hospital is able to meet its healthcare objective. 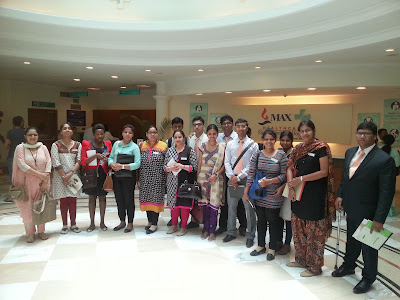 In order to make our healthcare administration students acquaint with the basic functioning of a Hospital and its services, INLEAD recently organized a visit to Max Super Specialty Hospital, a 504 bedded super-specialty hospital located in the heart of South Delhi, Saket. The hospital divided into East and West Wings, is one of the premier names in the healthcare industry.

Healthcare in India has grown at an unprecedented pace over the last ten years and has now become one of the largest sectors in India-- both in terms of employment and revenue. India with its well-trained pool of medical professionals is considered as a major player in the healthcare industry all around the world.

The budding Healthcare professionals of INLEAD had an awe inspiring and knowledgeable experience at the Industry visit. Meeting the hospital’s experienced management team gave them an extensive exposure of how to run and manage a large chain of hospital like Max. Accompanied by the Hospital’s HR representative, INLEADers were given a facility tour of the hospital and its various departments. 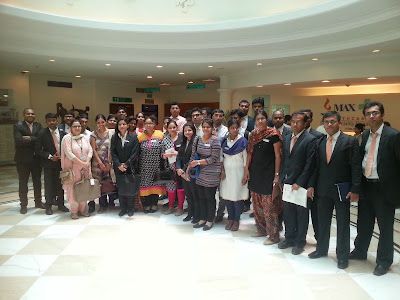 The visit gave the students great insights into the in-patient and support areas of a Hospital. It also gave them a broad overview of the industry that they are going to enter in the near future.
INLEAD believes in a perfect amalgamation of practical knowledge with theoretical knowledge and such Industry visits are a step towards just that.

Posted by Unknown at 6:10 PM No comments:

What’s better than being welcomed by the sweet aroma of freshly baked goodies? The students of INLEAD recently had one such experience when they got a chance to visit the Neemrana plant of Parle Biscuits Pvt. Ltd., the company behind the tastiest and the most famous biscuit in the world, Parle G. The visit was arranged by the institute as a part of a Corporate Training Initiative for its students. Till now what was just their favorite biscuit brand that they enjoyed with their daily cuppa morning tea, turned out to so much more towards the end. 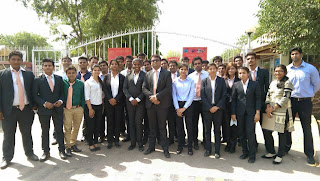 INLEADers got an exciting opportunity to witness the daily functioning of a world renowned brand like Parle. The Parle Product Team was more than welcoming towards the students and even matched their enthusiasm levels.  The team treated the students with a video presentation about the various products, operational mechanism, manufacturing process, and quality control practices adopted at the Neemrana manufacturing plant. They also got a grasp of the latest packaging techniques, Supply Chain Management of Parle Products, Quality Control Mechanism, and the company’s Market Strategy at play.

The highlight of the visit was the introduction to Asia’s largest Oven and its functioning. The 260 feet long oven is being used to manufacture various different types of products at the plant.


Overall, the industry visit provided the students with great insights into the working of an International brand like Parle and instilled in them hopes and aspirations to work in such a company in the near future.

Posted by Unknown at 5:08 PM No comments: