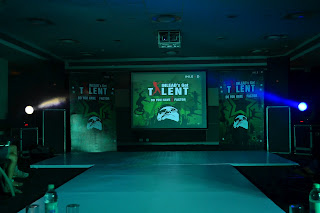 INLEAD's GOT TALENT show was organized by INLEADers of Jan and July 2012 batches. The show portrays a huge amount of talent ranging from fashion, dance, music, comedy and theatre. It was a unique experience in itself to see INLEADers showcasing their talents on the IGT platform with confidence and style. On the whole it was a celebration of diverse talent that INLEADers has to offer to the audiences and the alumni. The show was anchored by Mr. Varrun Tyagi and Ms. Charu Jishnu and was executed to perfection with their witty one liner and humorous acts in between the show. IGT began with the traditional Kathak Thumri performance by Ms. Rashika Yadav. The show included clips from behind the stage (done by Akshay Bhatia and Mahrook Salman) depicting the entire journey of preparation of IGT’12. The show continued with Fashion Show showcasing the Desi Tadka style & Panache, Dance Numbers which are gracefully performed on different themes, standup comedy by Vibhor Bhardwaj and a surprise comic act by Tushar Saini and Nipun Gupta that has left everyone rolling on the floor with laughter. It ended with the awards ceremony as Dr. Sangeeta Parijaat, President INLEAD and Mr. RC Gupta, Executive Director at INLEAD acknowledges the winners of INLEAD’s GOT TALENT and participants as well.


The list of winners in each category are as under: