Are Indian Newspapers losing their charm? 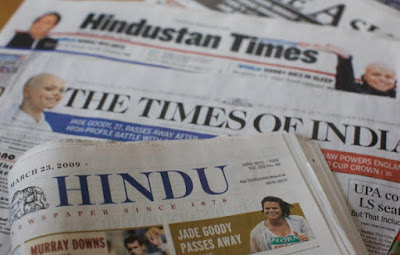 Reading newspapers or dailies, as we call them, has been considered to be one of the best habits humans have imbibed, ever since the learned civilization came into existence. From politics to sports, arts and lifestyle to entertainment, the power of news dailies is not unfathomed. My affair (sic) with newspapers started when I was barely eight. With every passing year, the bond seemed to get stronger and stronger.  I didn’t know back then, that it would hit a rocky path twenty years down the line.

The front page is the most important page of a newspaper. It is what passers-by will have chance to look at, and so it represents the showcase that might determine whether or not they will end up buying the newspaper. Many of us working professionals, thanks to our pacey routines, could possibly afford to read only the front page. Thus, the stories of the front page are carefully selected to catch the attention of a large number of potential readers. Everyday, newspaper editors meet and discuss to choose what they believe are the newsworthy stories of the day to constitute the next day’s front page.

However, the scenario has changed today. Most of the Indian dailies have started featuring full-page advertisements on the front page, some even to an extent of the first three pages, especially during the festive season. Blame it on the fierce competition, or the race for fetching sponsorship, the so called “critical” front page and its news have shifted to the third or the fourth, thereby leading to distaste for avid readers like myself.

With a readership base of over 250 million, India is the second largest print market in the world. However, this market is still under penetrated for a country with a population in excess of 1,200 million and highly fragmented with over 60,000 newspapers printed in 22 languages (Registrar of Newspapers of India). Advertising revenue continues to be the key growth driver behind the industry as declining readership and increasing competition have led the players to further reduce their cover prices. As result, this sector has been the most affected by the slowdown in advertising due owing to the recent downturn. Further, due to rising newsprint costs players were compelled to undertake multiple advertisement rate hikes during the first half of 2008, which on one hand improved per unit realizations from advertising, but on the other hand made the media an expensive proposition for most advertisers. (Source: Indian Readership Survey 2008)

What remains to be seen is whether these dailies continue to be caught up with their pro-commercial approach or shift back to preserving their original charm as a powerful instrument of the print media.

What do you think? Do share your views and inputs in the comments.