Syria –Then and Now

Syria, officially the Syrian Arab Republic, is a country in Western Asia, bordering Lebanon and the Mediterranean Sea to the west, Turkey to the north, Iraq to the east, Jordan to the south, and Israel to the southwest. Its capital is Damascus.

In the early 2000s, Syria headed towards gradual economic liberalization to spur growth. Some of the structured reforms agenda were supported through IMF technical assistance, including strengthening banking supervisions and regulations, modernizing the monetary framework developing a government debt market, strengthening and streamlining revenue administration, and improving public financial management. While poverty and unemployment were on the rise, Syria was making progress towards achieving the UN millennium development goals.

In 2009 “Doing Business Indicators”, Syria ranked 137 out of 181 countries, performing poorly on access to financing, and registering poverty, while making progress.  The three main obstacles in Syria’s growth were corruption, inadequately educated workforce and poor power situation. At the same time, political reforms were limited, except those initiated by President Bashar Al Assad.
But this is when things started to go downhill; when Russia supported rebels started to clash with America supported President Assad’s forces. And soon enough ISIS made Syria its base for unleashing terror across the globe. 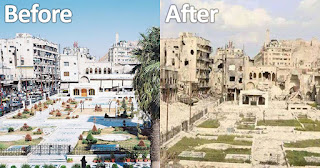 Syria-NOW
The 2011 uprising has evolved into a crippling and violent civil war with fierce fighting between the regime and various secular and Islamist opposition groups in different parts of the country. Syria has politically disintegrated into autonomous provinces and territories controlled by the central government, Islamic State of Iraq and the Levant (ISIL), and various rebel groups. The conflict has also attracted financial and military support from external powers, including Turkey, France, Saudi Arabia, US and Russia.

The population of Syria is estimated to have shrunk by at least 20 percent since March 2011. According to the United Nations High Commission for Refugees (UNHCR), more than 250,000 people have been killed and more than 800,000 have been injured as a result of the fighting. As of February 2016, UNHCR reports that about 4.7 million people have fled to Syria’s immediate neighbors—Iraq, Jordan, Lebanon, and Turkey. Almost 900,000 refugees had declared political asylum in the EU by December 2015. At the same time, the United Nations Office for the Coordination of Humanitarian Affairs (OCHA) reports that there are 7.6 million internally displaced people. About 70% of population is without adequate basic needs of food, water and education. Services—such as retail, wholesale, transportation, construction, and banking—have contracted sharply on account of a collapse of the overall economy, particularly tourism, and with heighted security risks, destruction of roads, and economic fragmentation impeding trade and commerce. Banking has been further impacted by the economic sanctions.

A recent report by the charity group World Vision and the consultant group Frontier Economics estimated that the conflict has so far cost Syria $275 billion in lost growth opportunities — 150 times more than pre-war Syria's health budget. A World Bank report estimates the damage to the capital stock in Syria to be more than $70-80 billion. The situation has deteriorated greatly since then.

There can be only speculation by political and economic pundits as to when the light will be visible at the end of the dark and dreary tunnel for Syrians. Let’s pray that humanity eventually wins and the world is, sooner rather than later, rid of the malaises of rebellions and terrorism.