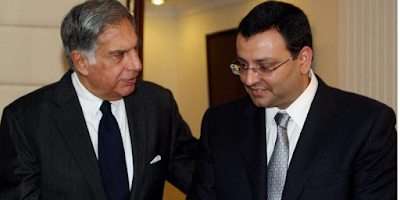 Jokes and headline floating around at Diwali eve: “Shortest Termination letter ever...TATA”; “Mistry ends, Mystery begins”. The net result is the erosion of Rs. 26,000 crores in market capitalization of the company. A fourteen month long intricate selection process, followed by a sudden termination does not bode well for a company that is “India Incorporated” for the rest of the world. And, as an executive rightly stated, “They are TATAs, not Ambanis who wash their dirty linen in public!”

Yet the linen did reach public dhobi-ghats and the mudslinging did start.

Once upon a time…

A company founded before independence soared high in the sky with Air India built on strong pillars of a steel giant, which soon went on to acquire an ailing British car manufacturing company and a Brazilian steel giant. The steel king or rather the Jewel in the company crown, decided to handover the company’s reins to a young and hardworking prince of real estate world, to fly it further. The dream seems to have crash landed and the Prince has lost his kingdom, to the erstwhile King of good times.

This story has the following characters: The Indian company – Tata Sons, the British company – Jaguar and Land Rover, The Brazilian giant – Corus, The new aviation companies – Air Asia and Vistara, The Prince – Cyrus Mistry and the Jewel – Ratan Tata.

Cyrus Mistry - head of Shapoorji Pallonji group which owns real estate construction company bearing the same name, Eureka Forbes, engineering goods, power and textile manufacturing companies - is a very reserved personality. His father Shapoorji Pallonji Mistry vacated the TATA Sons board for him and, his Pallonji Trust by virtue of its equity ownership is the third largest shareholders in the Tata Group. This made the selection of Cyrus Mistry, albeit after a rigorous process, a valid one to head Tata Sons.

Cyrus Mistry was never a dynamic leader and found himself sidelined by the Tata Sons’ board many a time for his strategic decisions, which he now claims were to reduce the heavy debt of the group. The Tata Group allegedly has debts close to $18 billion, a number that is equivalent to many countries’ GDP. The write-off of such a huge amount has sent alarm bells ringing in PMO (Prime Minister’s Office) and in Stock Exchanges and in SEBI (Securities Exchange Board of India). The way Cyrus Mistry handled the Tata DoCoMo issue was also not to the liking of Ratan Tata. (more details on TataDoCoMo issue can be found amongst our previous blogs)

As another executive stated that “Cyrus Mistry is a construction leader, not a constructive one!” So in fact, there was much angst about the way he worked and about the way he conducted business. Question arises about whether Cyrus loses his leadership of other Tata Group companies as well or just Tata Steel. The Tata Group has kept its quiet for most of the issues, claiming that dragging issues into public is definitely not their style and against the very ethos of TATA values.

Things will be laid to rest and with the resignation of former TCS chief Ramadorai as chairman of govt’s skill development agencies, rumours are abound that he may head Tata Sons as its new chairman replacing Rata Tata, who himself is an interim chairman after the ouster of Cyrus Mistry. (HT Business, Nov 2, 2016)

The corporate saga continues and we see another one bite the dust! But it’s the Tatas we are talking about. They will rise from the ashes like phoenix.