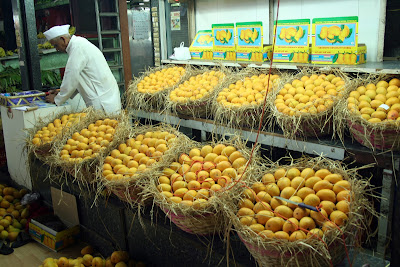 I would be understating if I wouldn’t say that India is obsessed with mangoes! India has been the single largest producer of mangoes globally, growing over 40% of the world’s total supply, according to Forbes emagazine. Be it Alphonsoes, which are world famous, be it Sinduri, Malda or Safeda, the variety of mangoes that are found in India is unbelievable and enough to satiate the mango appetite of all and sundry. Dussehri which is the favourite of people from Lucknow gets its name from the mother tree which is located in the village of Dussehri, and is the only mango that has a Geographical Indicator tag and hence is now a brand name. Then there are the, oh! so sweet Malda mangoes. There is a place in Patna, Bihar called Digha Ghat where the soil on the banks of the river Ganga are of a special kind that gives the Dudhiya Malda the flavor that has made it one of the most exported mangoes from India. India exports mangoes to America, UAE, Sweden, England and several other nations.

And now that we are aggressively moving into super-hot Summer days, mangoes will be the flavor for everything we consume, from soufflé to ice cream to cake and juices, the list is endless.

So what are the new launches this season in India?

India’s century old FMCG company, Hamdard Laboratories has forayed into ready –to-drink beverage segment with the launch of RoohAfza Fusion, a combination of RoohAfza’s popular rose syrup and pure fruit juice; and one of the flavor’s is Mango, but obviously. Maaza from the Coca Cola portfolio and Slice from the PepsiCo portfolio are also going aggressive in their promos pan India. Simultaneously, Hector Beverage’s Paper Boat brand and Parle Agro’s Frooti are also on a marketing overdrive.

This brings me to the product category of confectionery where mango candies have also given us the label of Candy Nation. While talking of candies can we forget to talk about Pulse?

Pulse is a candy from the DS Group, a Noida-based company, that is now considered to be a phenomena among FMCG brands. The name has been on everybody’s lips as also the flavor, kaccha aam. The company has ensured that the product-placement is at 60% of the retail shelves and now is moving into TV commercials in a big way. According to Brand Equity, a supplement of Economic Times, dated 12th April 2017, the hard-boiled candy segment comprises nearly 40% of the overall Rs. 6,600 crores sweet candy market. It is growing at an average rate of 20% year-on-year. Mango comprises almost half of the hard-boiled candy market, of which raw mango is 26% and sweet mango the remaining 24%. The Pulse campaign with the tag line “Pran jaye, par Pulse na jaaye!” , has also caught the fancy of the target youth audience.

It is thus inevitable that Mango continues to reign as the King of Fruits and India with its humongous population is the largest consumer of the fruit.