Who Ordained Trolls With Moral Authority? 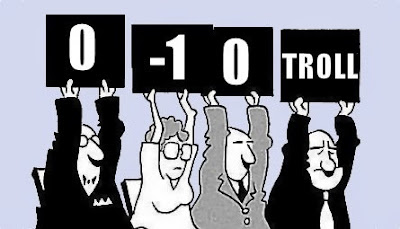 I have been quite upset of late by the vociferousness of the unintelligent and the rastamuffins, who seem to have chosen the path of destruction as their way forward! In this blog, I share my opinion on this disturbing trend in our society.

The natural political discourse of our nation these days has become rather polarized. Views are no longer views; they are acceptance and rejection of a narrative. The simplicity of debates has taken gargantuan proportions of verbal wars. And yet, we barely see the warring parties facing off each other on a dais especially set up with proper accoutrements and an atmosphere of innocent sparring. The platform for opinion sharing these days has funnily become social media, and a formidable actor has taken centrestage under the moniker “Troll”.

These Trolls on Twitter, FB and elsewhere have literally taken it upon themselves to be the flagbearers of everything in the superlative. They are, morally, politically and emotionally, the ones with a “holier-than-thou” character. They apparently characterize the epitome of all that’s supreme and inevitably have the irreverence to comment on everybody’s right to live! They condemned Karan Johar for his sexuality, they threatened Gurmeet Kaur for her invocation of peace not war, they slammed Anushka Sharma for her mere presence in a stadium! They choose to judge, to incriminate, to demonize and to sing a verse of nationalism no one has heard before. Their description of nationalism is incomprehensible and simply unacceptable.

My question to them is who ordained these trolls with any moral authority? They behave like political stooges who have chosen the easy path of being “The Ones”; The Ones who have converted a pen into a sword and who more often than not hide behind archaic ideologies to propagate their hate crimes.

It’s time the so called intelligent bourgeois need to step out of their safe zones and show the self-proclaimed Golaiths that in the final battle, David defeated Goliath. Its time someone told the Trolls and the so-called upholders of nationalistic virtues to choose who they really are, the Protagonist or the Antagonist of this stage called “World”. As Shakespeare once said, “The world is a stage and we all have a role to play”! So everybody get your acts together and let’s build a truly great nation, not one polarized by the haters and by the moral gendarmes.

Email ThisBlogThis!Share to TwitterShare to FacebookShare to Pinterest
Labels: Trolls