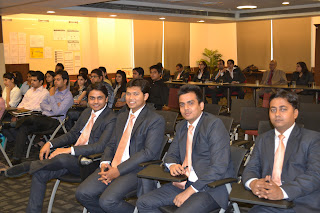 As a part of LEAD module INLEAD conducted an activity for its April 2012 Batch – War of Words. As the name sounds it was a debate competition, where students from all the programs of April 2012 batch had participated. They were all pumped up to do well and were ready with their armory (of Strong Points and facts & Figures). Student’s excitement levels were really soaring; we were glad that we had conducted just WAR OF WORDS and not the WAR OF ARROWS. 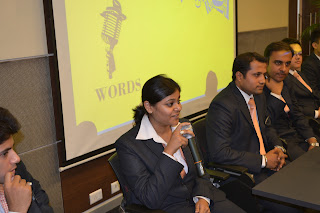 The activity was meticulously planned by our LEAD Faculty Ms. Priya Mehta. Students were given topics related to their specific industry domain. Groups were made to talk on For the Motion and Against the Motion. All the students had come up with some strong points and all the points were backed up by concrete facts and figures. Once the speech was over then the 2nd hurdle for them was to face some hard-hitting questions from the rebuttal panel and as well as from the audience. All in all the activity was lot of fun and overall students had made it quite successful.

It was a closely fought competition and all the students had performed exceptionally well but in the end judges had to decide 1 winner. Students were majorly tested on Language proficiency, presence of mind, communication skills, Question Handling and Audience Connect.

Winners of the competition:-