A series of attacks targeting young concert-goers and Parisians enjoying a Friday night out at popular nightspots killed scores of people in the deadliest violence to strike France since World War II. President Francois Hollande pledged that France would stand firm against what he called terrorism. Emergency has been clamped across the country. The concern is that France receives every year the maximum number of tourist visitors from world over, and hence the number of casualties of international citizens could be significant. 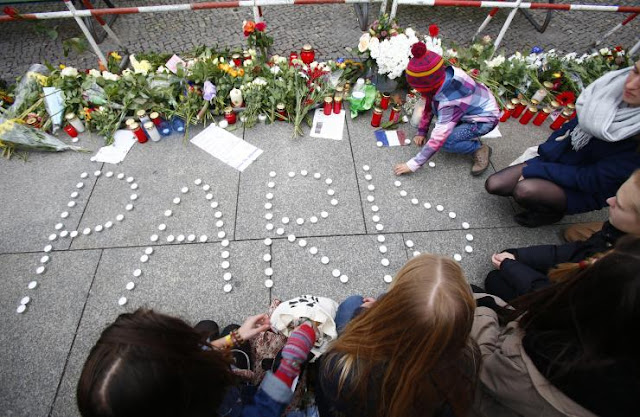 A total of eight militants were killed, including seven by their suicide belts. Islamic State says France is its key target: “…having dared insult our prophet, having bragged about fighting Islam in France and striking Muslims in the Caliphate with their planes which have not helped them in any way in the ill-smelling streets of Paris. This attack is just the start of a storm and a warning for those who wish to draw lessons.”

French PM, Manual Valls, asserted that Paris attacks were not on France alone but on humanity and human values. He said that, “There is a further fear of chemicals & biological attack from terror groups”. Some 1,500 extra soldiers have been mobilized to guard French facilities and schools and universities are closed because of the country’s deadliest attacks in decades.

French President Francois Hollande has been meeting top government and security officials after suicide bombers targeted a stadium, concert hall and Friday night cafe crowds in the attacks, which killed 129 people & wounded many more. French police has been hunting possible accomplices of eight assailants who terrorized Paris in this country’s deadliest peacetime attacks, a succession of explosions and shootings that cast a dark shadow over this luminous tourist destination. As of present in a raid at properties linked to the attackers about 7 terrorists have been arrested & 2 of them dead, with a lady killing herself.

Germany has offered France the help of its special anti-terror unit in the wake of the Paris attacks. Pope Francis condemned the attack vehemently. India and many other countries have issued travel advisory for their respective citizens. The Belgian PM, Charles Michel, has urged his citizens to avoid going to Paris unless “strictly necessary”. In Belgium, he added that security would be stepped up at public events. 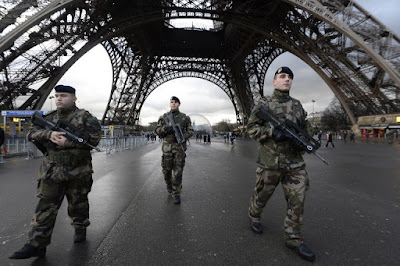 President Barack Obama has spoken by phone to French President Francois Hollande to offer the condolences of the American people for the attacks in Paris. British Prime Minister David Cameron also offered his condolences, saying he was shocked by the ‘brazen attack’ and vowed to extend all help possible. U.N. Secretary-General Ban Ki-moon condemned ‘the despicable terrorist attacks’. German Chancellor Angela Merkel issued a statement saying she was ‘deeply shaken’ by the horrific series of events and that her thoughts were with the victims “of the apparent terrorist attack.” President Pranab Mukherjee too condemned the deadly terrorist attacks in the French capital Paris and expressed anguish over the incident.

Those who survived an attack on a Paris concert venue physically unscathed have been attached to a special crisis center for psychological support. 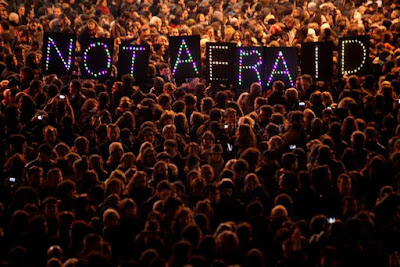 Emilio Macchio, from Ravenna, Italy, was at the Carillon restaurant that was targeted, having a beer on the sidewalk, when the shooting started. He said he didn’t see any gunmen or victims, but hid behind a corner, then ran away. “It sounded like fireworks,” he said. Emma Parkinson, 19, from Hobart, was at the Eagles of Death Metal concert at the Bataclan Theatre last Friday when gunmen opened fire on the crowd. At least 89 people were slaughtered in the venue. Ms. Parkinson was shot in the hip by an AK-47 round during the massacre. She underwent surgery to clean the wound and is now out of hospital and recovering.

France has been on edge since January, when Islamic extremists attacked the satirical newspaper Charlie Hebdo, which had run cartoons of the Prophet Muhammad, and a kosher grocery. Twenty people died, including the three attackers. The Charlie Hebdo attackers claimed links to extremists in Yemen, while the kosher market attacker claimed ties to the Islamic State group.

This time, they targeted young people enjoying a rock concert and ordinary city residents enjoying a Friday night out. France’s military is bombing Islamic State targets in Syria and Iraq and fighting extremists in Africa, and extremist groups have frequently threatened France in the past. So are the attackers home-grown terrorists or fighters from the IS group? In any case, what is the solution? And those are the big questions.