Here’ s Why We Need To Say NO To Plastic 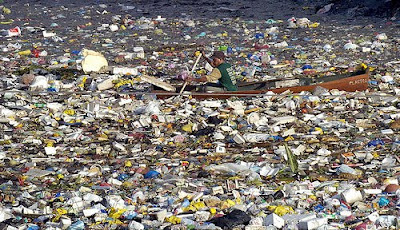 Plastic is a material consisting of any of a wide range of synthetic or semi-synthetic organics that are malleable and can be molded into solid objects of diverse shapes. Plastics are typically organic polymers of high molecular mass, but they often contain other substances. They are usually synthetic, most commonly derived from petrochemicals, but many are partially natural. Plasticity is the general property of all materials that are able to irreversibly deform without breaking, but this occurs to such a degree with this class of moldable polymers that their name is an emphasis on this ability.

The success and dominance of plastics starting in the early 20th century led to environmental concerns regarding its slow decomposition rate after being discarded as trash due to its composition of very large molecules. Toward the end of the century, one approach to this problem was met with wide efforts toward recycling. Some polymers may also decompose into the monomers or other toxic substances when heated. Most plastics are durable and degrade very slowly; the very chemical bonds that make them so durable tend to make them resistant to most natural processes of degradation. However, microbial species and communities capable of degrading plastics are discovered from time to time, and some show promise as being useful for bioremediation certain classes of plastic waste.

The greatest challenge to the recycling of plastics is the difficulty of automating the sorting of plastic wastes, making it labor-intensive. Typically, workers sort the plastic by looking at the resin identification code, although common containers like soda bottles can be sorted from memory. Typically, the caps for PETE bottles are made from a different kind of plastic which is not recyclable, which presents additional problems to the automated sorting process. Other recyclable materials such as metals are easier to process mechanically. However, new processes of mechanical sorting are being developed to increase capacity and efficiency of plastic recycling.

Many people have concerns on plastic shopping bags.  The traditional reason is that littered bags are unsightly and can create a hazard to animal life. Littering is often a problem no matter where you live in the world. In India’s largest state a new environmental issue recently surfaced which has resulted in a complete ban on the use of plastic bags. From the beginning of August 2010, the manufacture, storage, import, sale and transport of plastic carry bags will be illegal in Rajasthan.  No shopkeeper, retailer, trader, hawker or vendor will be allowed to supply goods to consumers in bags. The measure was proposed after local municipalities had complained of blocked sewer lines, drainage systems and water distribution pipelines due to plastics buried in the soil, providing breeding grounds for malaria and dengue fever. In Mumbai in 2005, India experienced massive monsoon flooding partially as a result of drains blocked by plastic bags, resulting in over 1,000 deaths. In talking to people – from shopkeepers to executives – it becomes clear that the issue of plastic pollution is one they are aware of and they understand why it is a serious issue.  This awareness and willingness to act to decrease plastic use and waste is slowly permeating in daily Indian life.

Email ThisBlogThis!Share to TwitterShare to FacebookShare to Pinterest
Labels: disaster, Economic, Plastic, Say NO To Plastic